A Week of the Unexpected

Last week was quite eventful. It started early Monday morning about 3:45am. I woke up to the bed shaking and thought one of the kids was trying to climb into bed. When I rolled over and didn’t see any children, but the bed was shaking even harder, I realized it was an earthquake. In the morning we found out it was located around 100 miles or more to the West of Kudjip and was about a 7.5. Thankfully, the buildings and hydroelectric dam on station didn’t suffer any damage. Some people had things fall of shelves and break, but the damage locally was minimal.  Even this week we continue to feel small tremors.

Many landslides were triggered at the epicenter and buildings were damaged. The last estimate I heard were that 30 people were killed. Here is a link to pictures Connie Aebischer took as Mission Aviation Fellowship (MAF) assessed the damage and prepared to help those affected by the earthquake.

At some point during the week we also had a lightening strike take out the phone lines on station. They are trying to get those fixed and updated. This biggest problem this creates is when the doctors are on call and the hospital needs to get ahold of them. Thankfully, we have cell phones as a back up and when those don’t work the security guards fetch the doctor to help. The landlines still are the best option for call, so they continue to work at getting those back up and running.

The large autoclave machines also quit working last week. An autoclave helps sterilize equipment for procedures in the ER, for surgeries and for C-sections. We have two large autoclaves and a couple that fit on a table top. Both large machines quit functioning and for a day or so we were able to function solely as a clinic, seeing outpatients and giving medications, but were not able to preform the functions of a hospital. Thanks to the work of maintenance staff, the machines are up and running again. You can read more about the impact this made on Dr. Erin’s blog here.

The power was also going off quite often last week and into this week. Thanks to the hydroelectric dam we have much more reliable power than we could get on national power. I’m not sure the reason, but during the day the electricity was good, but around dinner time most nights last week it went off. Sometimes it lasted for just a few minutes and other times much longer. Nathan’s headlamp has come in handy. Last night he was in the ER stitching up the wound on a lady’s heal. Her husband was mad at her and chopped her with his bush knife, cutting her bone and possibly cutting her tendon. In the middle of caring for her everything went pitch black as the power went out. While he waited for the generator to kick on, he was able to keep caring for her by the light from his headlamp. He was thankful it came on when it did, because all the little nighttime bugs were starting to swarm his headlamp.

One evening last week we made it through dinner and the power went off just as we started chores. The water won’t turn on without power, so in order to do the dishes we had a couple kids run outside with buckets to collect water from the large tanks. We heated it on the gas stove and did dishes by candle light. It was actually a fun evening and just as chores were finished the power came back on.

As Dr. Erin highlighted, there are so many people that help to make the hospital function and last week showed how important each person is, from those working on the phones, to the men fixing the autoclaves, to the security guards and the people working on our power. It takes far more than doctors and nurses to keep a hospital up and running and we are grateful to each person that has a hand to helping to bring physical and spiritual healing to the people of PNG. 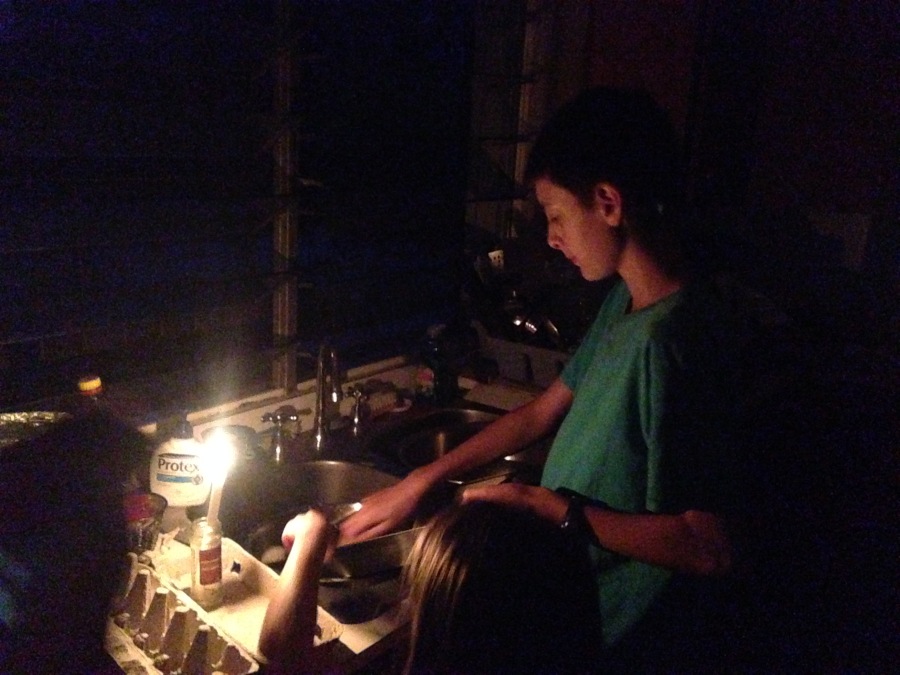 *All typos and poor grammar are brought to you by a busy mama trying to get back into the habit of keeping you updated through the blog!